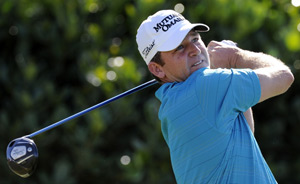 Mike Perpich was born in Covington, Kentucky in 1954, the son of a renowned high school teacher and head football & baseball coach, Milan Perpich. Mike's closest boyhood friends were Eddie and Jodie Mudd, the only pair of brothers ever to win the U.S. Amateur Public Links. Mike played high school football and basketball until golf became his sole focus. Among his early achievements was qualifying for the 1970 and ’71 U.S. Junior Amateur. Using the football program's movie camera and projector, Mike became one of the first players of his generation to film his own swing for study and analysis.

He earned a golf scholarship to Murray State University and competed on the varsity team there. After graduation came a PGA apprenticeship as an assistant professional at several courses and clubs, most notably at Shawnee Golf Course in Mike's hometown of Louisville. In 1979, at the age of 25, Mike became head golf professional at New Albany Country Club, across the river from Louisville in Indiana. He stayed there until 1982, when he accepted the head-professional position at Forest Heights Country Club in Statesboro, Georgia.

During this period Mike became closely familiar with Homer Kelley's scientific study of movement in golf, as described in The Golfing Machine, Kelley's legendary book. Another expert in this material, the former PGA Tour player Mac O'Grady, was a valued source of guidance and information to Mike as he worked to attain Master status as a Golfing Machine-certified instructor. He received all of those certifications under Tom Tomasello, one of the original authorized instructors of The Golfing Machine.

After seven years in charge of the golf program at Forest Heights, Mike moved into the Atlanta market when he signed on as head professional in 1989 at St. Ives Country Club, just a few miles from RiverPines in the town of Johns Creek, Georgia. He served the St. Ives membership for a decade, until March of 1999 when Mike finally gave up the broad duties of a head golf pro to focus solely on teaching and coaching.